In the Chair: Interviews with Poets from the North of Ireland / John Brown 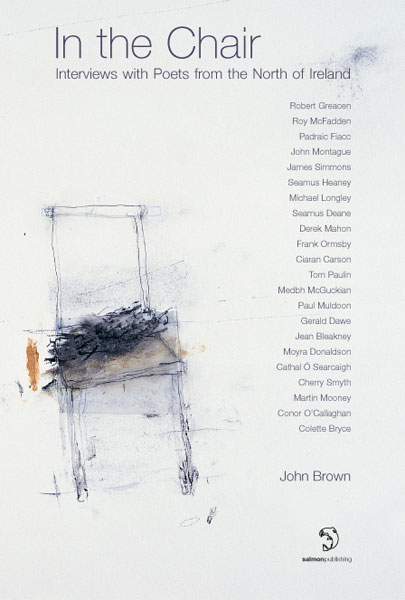 In the Chair: Interviews with Poets from the North of Ireland

The poets featured were all born after 1920; each poet has published at least one volume of poems. Arranged chronologically by each poet's date of birth (to cover poems written in subsequent, if not always consecutive decades) this collection deals with a body of poetry that has increasingly attracted critical attention. The book aims to serve the reader interested in poetry as the student of Irish poetry in general and "northern" poetry in particular by encompassing as wide a range of poets as is possible within the confines of a single volume so as to include both established and less well known voices. Successive interviews explore the poet's work and development, the social/historical context and the impact of assimilated influences. If the interviews explore a poetry often rooted in "the North" they also suggest the individuality and diversity of this poetry, of work whose imaginative range is not circumscribed by either literal borders or critically convenient categories. In a period marked by both the "troubles" and accelerating change these poets' voices represent a sane and humane search for places where, as Derek Mahon put it, 'a thought might grow' and these interviews explore and honour the energy and life in a poetry that was often missing from the social sphere.

John Brown was born in Co. Derry in 1961. He studied English literature at Bristol University and Scottish literature at Edinburgh University, edited a poetry magazine (Gown Literary Supplement) in the 1980s in Belfast and has continued to write articles on poetry and visual art for journals and magazines both within and beyond Ireland. He was employed as Literature Officer with the Arts Council of Northern Ireland for several years.
An excerpt from John Brown's interview with SEAMUS HEANEY

Q. You were born in 1939 and grew up on the family farmstead in County Derry. In your Nobel lecture in Stockholm, Crediting Poetry (1995), the poet receiving this great honour and the pre-reflective child (who 'lived a kind of den-life' largely 'proofed against the outside world') are linked when you 'credit poetry with making this space-walk possible'. That image seems to indicate a none-too literal or direct ratio between poetry and autobiography (in which imagination is already implicated). There is also, though, the 'umbilical' link with Mossbawn, your parents and friends, a core presence in the life of the poems. Did your parents influence you in different ways in terms of becoming a poet or in terms of the way they 'get into' the poems? As a recent poem, 'Known World' asks: 'How does the real get into the made up?'

A. My father figures strongly in the first poems I wrote. I remember being uneasy when Death of a Naturalist came out, wondering how he would feel when he read things like 'Follower' and 'Ancestral Photograph'. There was an underground cable between us and whatever messages were exchanged were usually sent through it rather than through any talk we might have had. Whatever influence my father has had on the poetry comes from my tapping into the cable. Or from being one of the terminals. As far as he was concerned, I was in a different world and seemed to be operating in it competently enough, but we had no developed language for linking up on subjects outside the first world we'd shared. The question could equally be, how does the real get out of the unsaid? Sometimes it doesn't, it just stays in there, like a charge. My father's bound to have been aware of that too. There was a touch of the diviner about him, after all. He used to hold a silver pocket watch over the place where there was supposed to be a spring, and the watch would start to oscillate. Or maybe it was he who made it oscillate. Anyway, in those early poems I dug in to get at the source. There was something being broached between us, and I suppose I was anxious that the broaching might lead to a breach. It was serious, but then the seriousness made poetry something more than a word game. It was life-changing, life-helping even, and there was emotional risk involved. What I was making up was making a difference in the real. Which had to mean equally that the real was getting into the made up. But how it gets in, that's still a question you can't answer ahead of time.

My mother, for example. It's only relatively recently she enters the poems as the whole mystery a mother is. All my life I'd remembered meeting her in the bus station in Magherafelt at Hallowe'en in 1951, on the day I was coming home from St. Columb's College for the Hallowe'en break. I'd gone off to Derry at the end of August so this was my first time back. There was this special chartered bus that took the south Derry boys from the college, dropping them off in groups at Draperstown and Desertmartin and Magherafelt. And it was a great surprise to me that she was there when I landed, in the old waiting room of the bus station. What I realize now, of course, is that she knew I would be arriving and had arranged to be in Magherafelt, doing the shopping, so that we'd connect for the last part of my journey home, which would be by the regular service bus. I think that was the first moment I saw her and she saw me as other, so to speak. It was a sort of Sons and Lovers moment. Anyhow, when the bus station in Magherafelt was blown up in the 1980s, I felt strangely connected to the event and eventually wrote a sestina - of all things - the one called 'Two Lorries' that's in The Spirit Level. The plain reality of explosion and obliteration got mixed up with the underlying untold reality of the memory. So the 'umbilical link' you ask about is in that poem, but it's also - as you say 'none too literal'. I suppose the line I once heard from the sculptor Oisin Kelly is one way of putting it: 'These things are not secrets, but mysteries.'

Q. Preoccupations (1980) records Anahorish, primary school in the 1940s, and it recounts encounters with three genres of poetry early on: bawdy, earthy rhymes; patriotic ballads or 'recitations'; school poetry learned by heart, like Keats's 'Odes' where 'midges' were 'gnats'. Do these three forms or tensions between them ghost subsequent poems?

A. Undoubtedly. The Anahorish schoolboy was learning big art language and being set on track to become the A-level candidate and the First Arts student. Linguistically upwardly mobile. Except that the sociological metaphor isn't quite right. I've always liked Vincent Buckley's resistance to the idea that a more elaborate and developed language constitutes a displacement: he saw it as an increment of inwardness, an entry to further language. I mean, there was nothing in my actual experience that matched the upper class twit world of Bertie Wooster, and yet as an adolescent I rejoiced in P.G. Wodehouse's prose. I suppose I eventually tuned the further language to the first note. Or better say it tuned itself. I'm conscious, all the same, that some of the recent work I've done in criticism and translation grows out of that old vernacular stuff that's always there, deep down. I got great pleasure a few years ago, for example, going back to Robert Burns, finding the hidden Scotland in me, so to speak. There's a terrific swing and at homeness about the Burns stanza, it collapses the difference between high and low. You can have your oxters and your Oxford in the one breath. I did an essay for a book published on the bicentennial of Burns's death and found myself writing a whole page about his use of the word "wee" in his poem to the mouse. 'To a Mouse' as a truly weird, fateful, soothsaying poem, scaresome rather than sentimental. 'Wee' is the first word in the first line, and it goes in like a wedge, like the ploughshare wrecking the mouse's nest, and it opened a channel to all that old stuff back down there in my ear. The result was that last year I found myself doing versions of Robert Henryson. Henryson wrote in Scots, in the fifteenth century, his own versions of fables from Aesop, very down to earth, the kind of thing you could have read out years ago at a local "variety concert". Canny old stories about the town mouse and the country mouse and all that sort of thing. At the same time there's a certain literariness about the writing. The poems are in rhyme royal, in the stanza form Chaucer used for Troilus and Criseyde. So I started to do an update of the old Scots just for the pleasure of rhyme and the roll of the stanza and the chance to get the occasional birl of local speech into the venerable text. It's the kind of verse you could imagine Billy Connolly doing for a big audience. Recitation. Back to the variety concert...
Irish Emigrant Online, May 2002:

"In this hugely informative series of interviews, John Brown has delved into the biographical, social and literary influences of twenty-two Northern poets. Beginning with questions about early family life and the introduction to words, which Donegal poet Cathal O Searcaigh memorably describes as "Those winged birds that made the air around me whirr with excitement", the editor probes the extent to which the ongoing social and political unrest impinged on the poet's work. A major part of each interview concentrates on the different collections of poetry, with the editor's questions focusing on a particular viewpoint apparent from the poets' work. In this way he is able to draw out a range of influences which have coloured the poetry of each of the interviewees, making this an invaluable book for the student of poetry as well as for those with a more relaxed interest in Northern literature. The poets interviewed are arranged chronologically from their years of birth and range from Robert Greacen to Colette Bryce, encompassing the views of poets who have helped to express the evolution of Northern life over the past decades."