Curve of The Moon / Noel Monahan 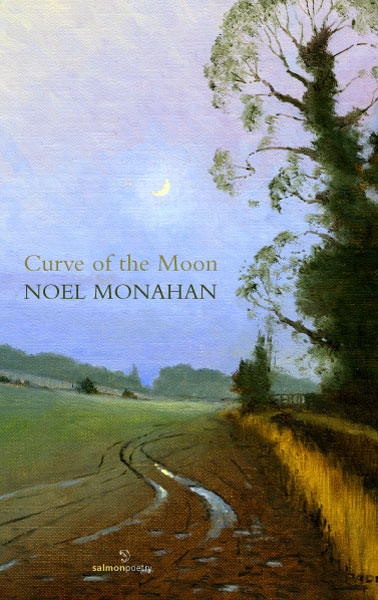 Curve of The Moon

Monahan's voice is shimmering with light, at his best when writing about life in the country ...  Noel Monahan is a poet with a strong track record.
Maureen Gallagher, Poetry Ireland Review

Noel Monahan has transformed the base metal of words, through the crucible of wisdom and experience, into the molten gold of poetry.
Helen Dwyer, Irish Writers Union

Monahan cares for his place, ... the dark days and the moon filled nights, the sullen earth and the sparkling dewdrops on a five-barred gate.
Rita Kelly, Giving Voice, Contemporary Cavan Writers

Noel Monahan was born in Granard, Co. Longford. He has won numerous awards for his poetry and writing. His awards include: The SeaCat National Poetry Award, organised by Poetry Ireland, The RTE P.J. O’Connor Award for drama, The ASTI Achievements Award, The Hiberno-English Poetry Award and The Irish Writers’ Union Poetry Award. He has read his work on Sunday Miscellany, RTE Radio 1, and in a number of universities in Europe and North America. His poetry was prescribed text for Leaving Certificate English, 2011 & 2012. Chalk Dust is Noel Monahan’s eighth collection of poetry. A number of his poems have been translated into Italian, Russian, French and Romanian. For twenty-six years he has worked with Heather Brett as co editor of Windows Publications.   Recently, he has had work included in the following anthologies: Windharp, edited by Niall MacMonagle and published by Penguin, Tra Una Vita E L’Altra, published by Guanda, Italy, Lost Between, New Island Press, Everything To Play For, published by Poetry Ireland, Even The Daybreak, published by Salmon, and Reading The Future, New Writing From Ireland, Arlen House. Noel Monahan holds an M.A. in Creative Writing.
The Calf-Bearer

It wasn't the fore-locks of the marble horse
Or the ringlets of Kore that caught my eyes
But the calm and stare of the Calf-Bearer,
In the museum of the Acropolis.
A farmer like my father with a calf
Slung over his shoulder, the field his altar.
He knows the agony of clay, the language
Of weather, blaze of the sun, squally winds,
Apples dropping on the lap of autumn,
Winter under the trees of the moon.
Travelling alone, down the mountain side,
At one with the secrets of stone and clay,
Eyes set on the road ahead, never looking back,
The house always somewhere in the distance.

"Noel Monahan is an established and seasoned poet whose work can be relied upon. Interestingly, he isn't included as a contributor in the above tome either. He is also a playwright, his 1994 presentation in drama form of Kavanagh's poetry, Half A Vegetable, being memorable. In the four sections of Curve Of  The Moon, Monahan investigates the essence of localised and personalised memory and one short section includes some poems by him in Irish along with his translations. Section 4, "Diary Of A Town" is subscribed as "A Dramatic Poem", and indeed one can without much difficulty imagine its being performed, voices-and-music, Beckett-style perhaps, ( there’s more than an echo of Dylan Thomas's "Under Milk Wood" here too ); everything cut down to the words, the sounds, the linguistic elements:

The town lies still
Children are sardined into a bed,
Three at the top, two at the bottom,
Rosset Kelly is waiting for the cat to purr …

And we have Thomas's poem, (billed section as a "play for voices") :

You can hear the dew falling, and the hushed town breathing.
Only your eyes are unclosed to see the black and folded town fast, and
slow, asleep.

Having eaten in the wonderful Green Room restaurant in Laugharne ( pronounced "Larne") recently while it rained outside over the wooden statue of Dylan Thomas staring down the inlet towards his old work-room, perhaps the poem has a resonance for me. But it is undoubtedly in this slow rural Irish town depiction that Monahan has his genius, and that isn't too big a word to use in these iPod days. So let RTÉ’s Drama Department get on the job and take this section of Monahan's new collection and dramatize it for radio. Go on, then. Don’t be shy.
Given that our writers have been notoriously mute as Israel used Irish passports to do murder in Dubai and slaughtered Turkish relief workers on the high seas, it's no surprise that they didn’t find their tongues as our banks collapsed and the rich of Ireland winked while even the blind had their allowance cut. So it is refreshing to read "Catching Each Other by The Tail", where Monahan offers up a satirical roast: "A judge in a District Court / Sends a man to jail for whispering. / Bishops in buskins and zucchettos / Don’t agree on Child Protection. / Politicians in mohair suits, / Grease the wheels of the treadmill …" Monahan shows a crafted lyrical side in the title poem: "Watch for her shadow / Behind the clouds, / Cradle of light in her arms …" So a very rounded poet here, with things to say and songs to sing while remaining always a pleasure to read.

A bumper collection, anecdotal and imagist including the lengthy "Diary Of A Town" and with sonnets while the truest criticism is in "Summer Holiday" We are a possessive people, attached: / To small holdings, a view we take on trips." And "Holiday homes if we won the lotto". In "A Ghostly Letter From Sheridan To Swift" the contemporary is glossed with another era: "Only Pat The Baker survived the fall / And Dunne's Stores Better Value Beats The All". Dissatisfaction pervades "Catching Each Other By The Tail":

Politicians in mohair suits,
Grease the wheels of the treadmill,
Bend the Green Greenness of Éire
So the peas can run freely in their pods,
Then pause and listen to themselves.

In Monahan's Ireland the natives wear tight shoes and perhaps never run free. The moon leitmotif as blade of reality is benign in "Curve Of The Moon": "Maiden, mother and moon, / Ladleful of milk in the stars" while "November Moon" is the celestial clock with "Its drowned face below a sea of stars / Has yesterday’s light on its lips." Nature and Eros are the only constants as in "Sheela na Gig" which yields a redolent image, "Gaping vulva in the curve of the moon."
"Diary Of A Town" is both dirge and celebration over twelve sections evoking Monahan's townspeople, moving from schooldays to the grave while the conclusion is mildly comic as trousers have to be put on to face another year. Time is not but was: This is the Monahan vision.

Other Titles from Noel Monahan 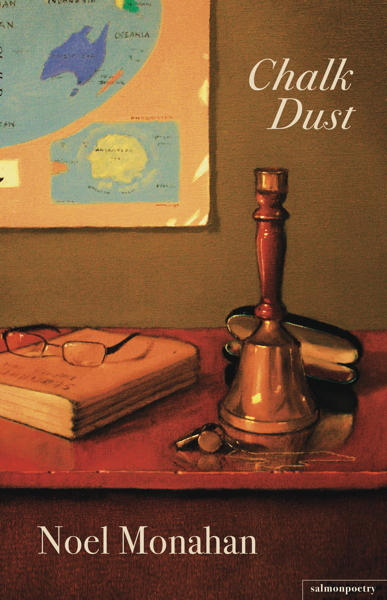 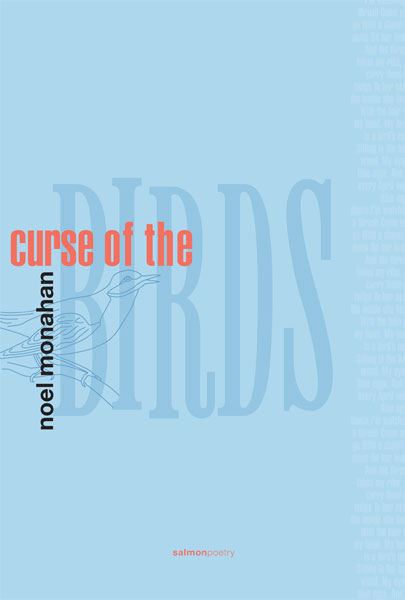 Curse of The Birds 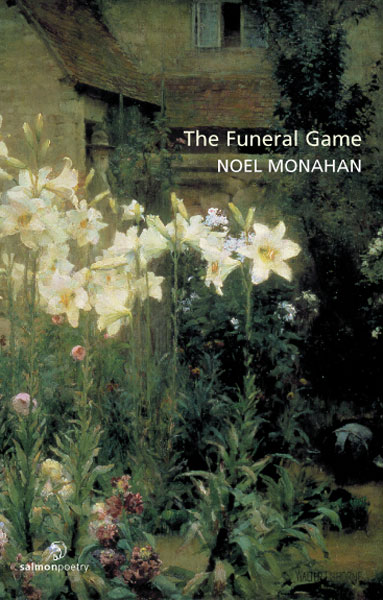 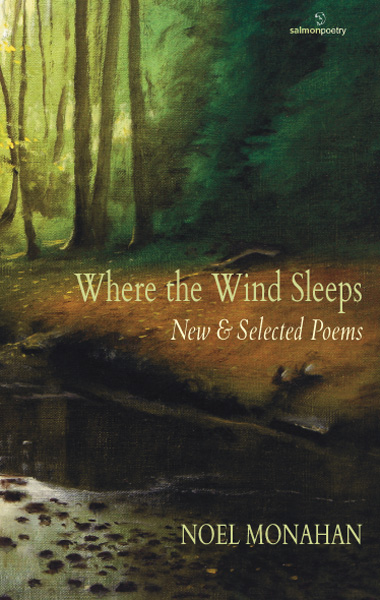