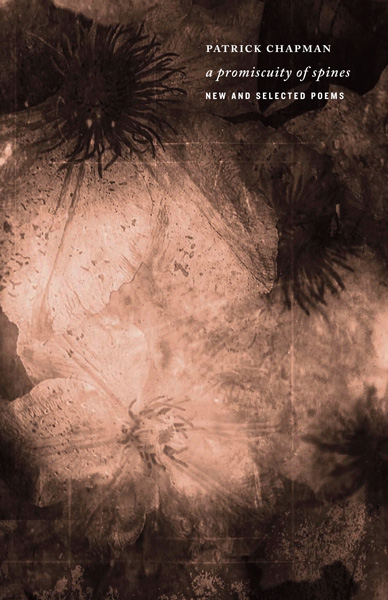 PATRICK CHAPMAN has published eight poetry collections since 1991, as well as a novel and three volumes of stories. His other works include a short film, television for children, and audio dramas for Doctor Who and Dan Dare. He produced B7’s dramatisation of Ray Bradbury’s The Martian Chronicles for BBC Radio 4. With Dimitra Xidous he edits The Pickled Body.

Doppelgänger Clues
You wake me with a squeezing
Of strawberry cut – one drop
On my left lid, one drop on my right –
And the tenderest kiss to my nose.
I open my strawberried eyes,
Expecting to find him in the room,
Lotus on the duvet, uncrossing;
Dissolving before I can make out his edges –
But he has not come. I have to
Do this on my own. I know he
Turns up when I am not looking
Out for him. There’s evidence.
My beard hair on his razor
In your bathroom cabinet.
His love bruise on your neck
That day in Grace Cathedral Park.
In his mouth, my brutal tongue,
Smarting after you have kissed and bitten it.
The Voyager Mote
There are no traces, at the edge of deep,
Of chocolate or lilacs, of deathcaps
Or bicycles, of god or schizophrenia,
Of socialist theatre or the kakapo. Nor
Is there evidence at all for the time
Your grandmother settled you, a bairn
On her bony old knee, and told you how
Her father lined his family up, out by the gable,
And cracked a horsewhip, lashed them open –
Daughters, wife and sons – because the Tans
Had smoked his brothers from their cave
And shot them in their heads, and they but lads.
There is no indication whatsoever here
That Brundle discovered insect politics;
That Hedy Lamarr invented Wi-Fi;
That someone inconnu first typed Fin.
There are no inklings from six billion k
Of the day you were sent with a girl,
To deliver a bucket of milk to a man
In a cottage a mile away, and you barely five.
It took the pair of you to carry the pail.
On the way you saw beyond your world:
The garments of travelling people,
Draped on a dry-stone wall to bake.
Here there is no argument for Mormons,
Or Marilyn Monroe, or Mitochondrial Eve,
Or Mao, or Mary or Moses or midichlorians.
No sign of Martin Luther King or Eminem.
Neither is there any hint out here
Of the student actor who, after you sat down
From speaking in public that very first time,
Reached from behind you with two
Lucky Strikes, both alight; and landed them
Between your lips. It was the beginning
Of your beautiful friendship
With toasted tobacco, and loss.
No evidence of all we are or anything we’ve done –
Not until you know what it was for,
This flower that sent the misprint planet home,
The period in every question mark.
Copyright © 2012 Patrick Chapman
Review: Jessica Mayhew reviews A Promiscuity of Spines for Eyewear (November 2012)
Mayhew On Chapman
Newly arrived in London, I was struck by the constant chatter that stole through the previous occupant's grey curtains and into my room. Lovers' tiffs, actual tiffs, drunken revellers tossed from the night buses, all punctuated by the call-to-prayer. Reading 'Night on 109th Street' by Irish poet Patrick Chapman, I was gripped by his keen observation of the enforced intimacies of city life. "Forbidden to smoke in the apartment," the speaker of the poem sits on the roof and watches aeroplanes and fire hydrants, and all the debris of the streets. However, the speaker's attention soon switches, until he is spying on the neighbours. The activities begin seemingly innocent; the reader hears the "sudden creak of cello" or a football game, but curiosity soon uncovers a driver asking a girl "Baby, how much for a suck?" This penetration of privacy continues, and the speaker watches:

A man in an adjacent building - cooking supper in the nude -

After I have smoked enough I walk towards the stairs

And climb across the walls by which someone from down below

Found me asleep this morning, in the sunshine, getting burnt.

Here, the visual focus of the poem is reflected back to the speaker. Through sleep, and exposure to the city and the unknown watcher, the speaker of the poem is found to be as vulnerable to the gaze as the neighbours of 109th Street.
Chapman's poetry is marked by this close observation, which often has a disturbing undertone. The fragmentation of the body is one such reoccurring theme in A Promiscuity of Spines. The collection opens with 'Love,' which could be the story of a murder, or simply the removal of an ex-love interest's possessions from a person's flat. The speaker relates:

I tucked you underneath my bed:

The closest you had even been

To sleeping with me

The familiar comfort in the juxtaposition of "tucked" and "bed" is made sinister by the preposition "underneath." This domestic setting is marked by fear:

I find you in my headphones

When I listen to the symphony

That used to terrify you.

The ex-object of desire is deconstructed through the poem, ending with silence and the potent suspense of held breath, which seems to also demonstrate the way that language can be used to take things apart. This sense of being unmade is also clear in 'Backward Child.' In this poem, the speaker imagines his birth and conception in reverse, ending with the italicised possibility of his coming into being. He describes:

I curl and close my eyes, an embryo.

Sound-patterning is very effective here, with the rhyme between "swirl" and "curl" drawing the phrases into themselves, mirroring the reduction of the poem.
A Promiscuity of Spines is a collection speckled with "you," exploring the nature of contemporary love. In 'Easter Comet,' a woman contracts poison ivy. She is aligned with a comet in the sky:

As though the sky has run off with some luminous

The fact that the comet was a "portent of the plague in other ages" suggests that the woman herself is dangerous, as well as fearless. However, the final stanza is touched with gentle regret:

The tide is rolling out. The sea goes on into the dark

The tide suggests a pull across a growing distance, whilst the woman herself is linked to the night through the comet and her "night-dress." Chapman is skilled at expressing the ways in which people touch each other's lives. 'Cicatrice' reveals how imprints can be left by others. The speaker notes:

Bleeding your wrist on invisible shards

As you opened the frame just a crack for some air,

Letting autumn leaves in from the fingers of trees.

The poet uses the sonnet form effectively, using regular rhythm and internal rhyme, which lulls the reader along. The traditional volta reveals a turn in the sonnet and the lover departs:

You tried often to show me how two falling leaves

Might collide in the rain, on a current, and sail

As one leaf. In the end, Winter rattled us loose.

These poems often appear to revolve around an absence, whether it’s the lack of truth, "that you left more in me than I ever let on" ('Cicatrice'), or the presence-as-absence of former lovers, as in the title poem 'A Promiscuity of spines.' In a way these poems appear to stand as records, and are coloured by a fear of forgetting. 'The Forest' explores the notion of suicide and natural death, personified as a "sniper:"

One day you observe yourself alone

Walking that cold forest in your head.

You never hear the shot. The weapon is not found.

Everything you ever were is buried under the snow.

This stylised scene betrays a fear of death as the great eraser. The image of the snow acts as an annihilation of the self. However, the act of poetry goes some way towards sustaining the identity of "what's forgotten by the ones/ Who do not know they have forgotten."
A Promiscuity of Spines spans six collections, and yet the poetry flows to make a coherent whole. It is a very human collection, and Chapman is skilled at confronting the complexity of emotions through simple scenes, and immortalising them before the fall of numbing snow.
Jessica Mayhew is a young British poet and reviews for Eyewear.

Other Titles from Patrick Chapman 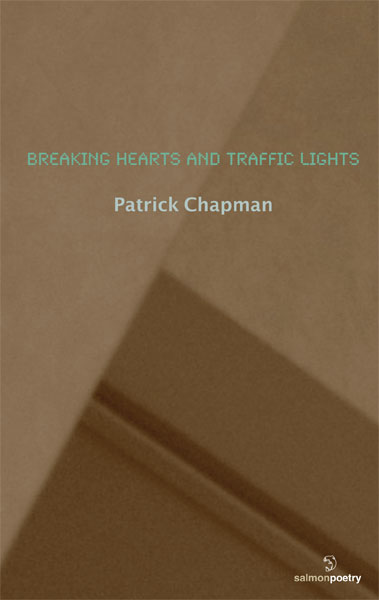 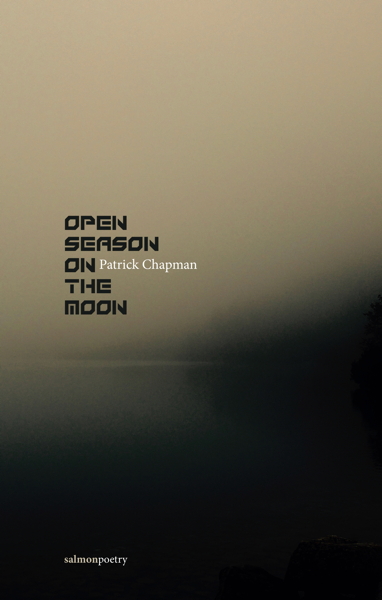 Open Season on the Moon 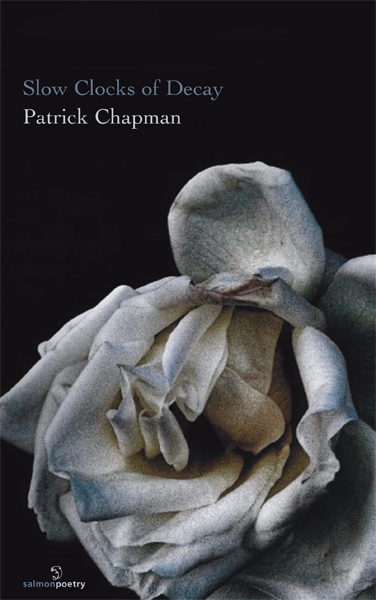 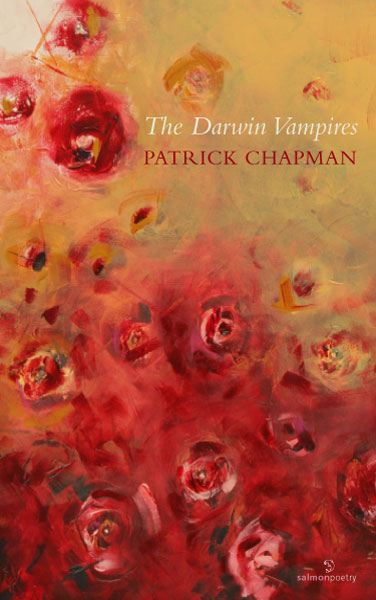