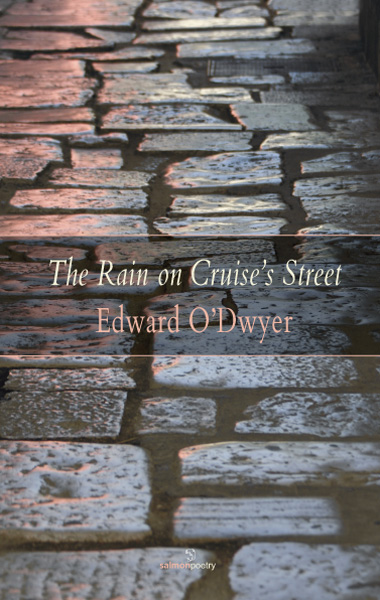 The Rain on Cruise's Street 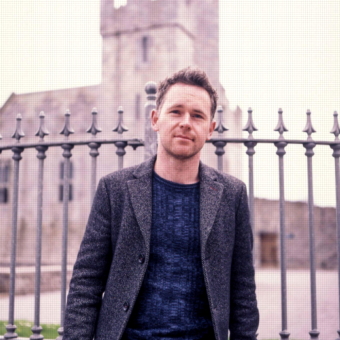 Edward O’Dwyer is a secondary school teacher, poet and fiction writer from Limerick, Ireland. He has published three collections of poetry with Salmon, most recently Exquisite Prisons which appeared in 2022. It followed The Rain on Cruise’s Street (2014), which was Highly Commended in the Forward Prizes, and Bad News, Good News, Bad News (2017), which contains the poem, ‘The Whole History of Dancing’, winner of the Best Original Poem award from Eigse Michael Hartnett Festival 2018. He has represented Ireland at Poesiefestival, Berlin, for their European ‘renshi’ project. He took part in Poetry Ireland’s Introductions Series, and has been shortlisted for a Hennessy Award for Emerging Poetry. His first short story collection, Cheat Sheets, was published by Truth Serum Press in 2018 and features on The Lonely Crowd journal’s ‘Best Books of 2018’ list. His poems and stories have been published in journals and anthologies around the world, both digitally and in print. He is the current Poet Laureate of Adare, Limerick, named by Poetry Ireland as part of their Poetry Town initiative.
Your Life on the Dole
Each day a little more
you’re dreading walking by
the window of that Subway,
finding that, in it,
isn’t your most recent ex-girlfriend,
still serving greasy sandwiches.
Once a week now
you’re Googling all the names
you can remember
from that little black book you never kept,
making sure your sudden leave
hasn’t been the telling factor
in any rapid rises
to fame and fortune.
But you’re so sure someday,
and sooner rather than later,
will be the fruition of these fears.
That someday you will not be gasping
with relief at the words
‘no results found’ –
no more the reprieve in knowing
they’re all still relative nobodies;
just as you left them.

She has thought of it, of leaving the house,
starting out afresh some place far from there;
a place that never felt those footsteps;
where nothing knew that touch of hand;
where the air doesn’t remember his breath.
But she thought of what she’d be leaving
if she did it, just upped and went; thought of
all the clothes, still folded in drawer-chests
and hanging up in wardrobes, from them
the unmistakeable scent since gone;
it all left undisturbed, untouched from
that day burned forever in her memory;
the time, the taste of strong tea on her tongue;
the knock, the face of the young officer
on her doorstep, cap clenched in his hands,
voice shaking in the morning chill.
Mostly, though, she thought of the shelves
on the bookcases; all the books he’d read
in his lifetime; all those pages through which
his fingers had passed, rested gently on,
smudged with their natural oils;
pages where, perhaps, flakes of skin are left
behind, preserved as a leaf or a flower
may be preserved; a piece of him; something
to stay for; worth keeping, she’d think.
The Rain on Cruise’s Street
Right now
I’m envying the rain on Cruise’s Street.
And it occurs to me
I’m probably the only one,
but I am in no hurry
as shoppers
rush between Claire’s and Boots
as it heavies and thickens
and the clouds overhead
groan machinelike.
And yet my envy
I could pinpoint down
to a single
and isolated drop.
This one,
I could scapegoat for the rest
as they come down,
lashing the faded red-brick
in torrents,
turning it a muddy brown.
That full and luscious drop.
That one right there,
see it?
The one trickling
down her neck
like a lover’s liquid tongue.
Copyright © Edward O'Dwyer 2014
Review: The Rain on Cruise's Street reviewed by Joe Horgan for Books Ireland (Jan/Feb 2015)
Songs of love, lust, life and youth
by Joe Horgan
In the poem "Noise", in this first collection, the poet has a pianist say

'the only task
of the musician is to create
a sound even sweeter than
the silence he breaks.
Anything less, he knows,
is mere noise.'

In these simple lines, I think, lie the intent and bravery of this truly impressive collection, for Edward O'Dwyer arrives here as a poet of a markedly different order, and with this collection there is something fresh on the Irish poetic landscape.  These poems, at their best, have a swagger of arrogance and cockiness that poets do not usually possess and the work is all the more seductive because of it.
So when O'Dwyer speaks of breaking a silence he does so in the full knowledge that there faces every poet the idea that there might be 'nothing to add / as I sat composing blank lines' ('Note Following a Blank Page'). In a society awash with noise, blogs, phone-ins, Facebook and Twitter, it must occur to every artist that silence might be the best response. Thankfully Beckett has already done that for us, so we know that it has been done better than we ever could, but we do write and Edward O'Dwyer writes with an ease and a poetic simplicity that is again part of the overarching confidence that this collection embodies. He does not dazzle you with pyrotechnic language or displays of cleverness but you are left in no doubt that this is because he does not need to. Like a Limerick Raymond Carver, he keeps it simple because he can.
The collection begins with the romantic 'Just by Chance', and romance, love and sex are O'Dwyer's big concerns throughout. This is a lusty, headstrong collection and is adept at exploring the vulnerability and insistence of young men and young men's sexuality. In 'Playing Guitar', for instance, the truth that this collection is an album of poems attempting to seduce women - or attempting to write poems to seduce women - is laid bare, even if we have to forgive the poet for wanting to play 'Eric Clapton's Layla'. There are darker elements, too, as in 'Keeping', where the poet seems to imagine the reaction to his own tragic demise, or the sudden shock of 'A Corpse in Snow'. There are nods to writing itself that anyone who has ever thought of writing will recognize:

'times when pen and paper
were nowhere to be found
and he trusted that fickle little voice
whispering again and again
I'll remember, I'll remember'
('The Lost Poems').

This is an honest poet, able to engage with his own craft in a way that is not at all self-indulgent. There is a lot of well-judged humour, too, in such poems as 'Pints With God' or 'They Have Mistaken Me', and a gorgeous children's rhyme quality to 'The Secrets in the Sea'. I am less fond of the villanelles, 'This Old Pain" and 'Things Are Always Changing', as I am not really taken with form - shape, yes, but form to me is just the kind of parlor game with which poetry is bedeviled. But that is just me, and this collection is not marred by these, and for a first collection it has very few weak tracks. It is not an album with a lot of filler, and if I had to release one guaranteed hit single it would be 'Deciduous', which is a beautiful, heart-stopping whisper of a poem - whispered, that is, by someone like Tom Waits:

Come one!  How good is that?
I will come clean and admit that I asked to review this book, and at the risk of injecting way too much of myself into the review I will add that as a rule I do not review poetry, because as a poet myself I find doing so just too loaded, too personal - which is daft really, because someone has to. However, I heard Edward O'Dwyer read once and I was really struck by him. If you ever get a chance to hear him make sure you do. You will remember it. He is like a younger Billy Ramsell or a male Eileen Sheehan, two of the finest poetry-readers in this country; and yes, I did have a pint with him afterwards and a chat, but I am at best an acquaintance and this is an honest-to-God review.
I am a cranky old fell at this stage and I do not give out the bouquets easily. But, boy, this is good stuff and I really hope it finds its readers. It is a collection full of love and lust and life and youth, and Edward O'Dwyer has more than a whiff of the true poet about him. So I will let him sing us out, with a few lines from the title track, 'The Rain on Cruise's Street', a hymn to rain, Limerick and women.

'The full and luscious drop.
That one right there,
see it?
The one trickling
down her heck
like a lover's liquid tongue.'

Yeh. Edward O'Dwyer? He's got it. Hasn't he?
Joe Horgan

Review:  The Rain on Cruise's Street reviewed by Liam Murphy for The Munster Express (November 2014)

There must be something remarkable about the rain in Limerick, since Angela's Ashes. Has it literary qualities or must Limerick writers tag it or reference it in their work. Salmonpoetry's new poet on the block, Edward O'Dwyer, is an exciting new voice, and his first full collection, The Rain on Cruise's Street, demands attention as he poetically pinpoints a single drop of rain between Claire's and Boots, as it trickles down a girl's neck.

Some of the work is juvenile, and pop lyrical with rock chicks, punk rock, ripe age of sixteen. Then he changes up the gears with, The Dark And The Wind ("I just can't remember what youth taught me... youth left no farewell note on my pillow"). He segues into the surreal in, Pints With God, and hopes the Deity will turn "two pints into many".

Love and the years move swiftly on, and the poet is no longer worried that his 'proud parents' would read 'this book' and discover "I've had a sex life/ and all of that time out of marriage,/ often even out of love" Concerns are 'Gooogled' and 'no results found' in a poem, Your Life On The Dole.

Love is, Mostly For You, where the 'other woman' is Emily Dickinson. Quickly it is the love, they used to make ("they both remember it very well; only look at each other like they've forgotten")

In a section, At A Loss For Words, the concerns of a poet for the meaning and value of words is powerful and you begin to notice the development, and depth of meaning some poems proclaim loudly ("to produce them out of nothing").

You linger with, Things Are Always Changing, but you wonder why he sounds resigned to end that poem with "Just let them be". You might bristle at the selfie of fame "as if to suggest an Angela's Ashes minus all the shit weather would not be such a downer of a read".

Edward O'Dwyer is not 'such a downer', and next year the prestigious, Forward Poetry Anthology, will include the poem, Just By Chance, from this collection, with its beautiful " we kissed our first kiss in that unlikeliest of ways. Sometimes things happen so perfectly, and yet just by chance". This book shows that 'sometimes things happen so perfectly'.

Other Titles from Edward O'Dwyer 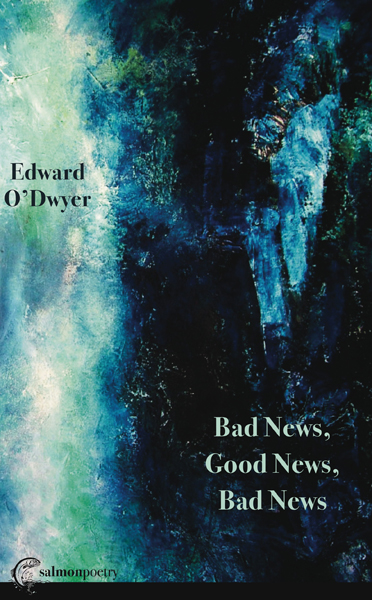 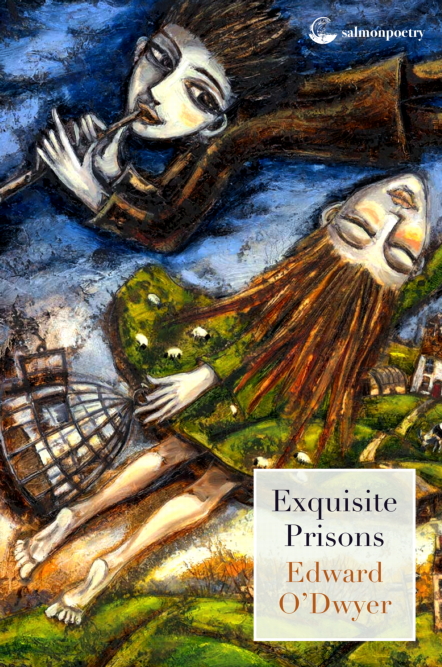