Daughter and Other Poems / Jessie Lendennie 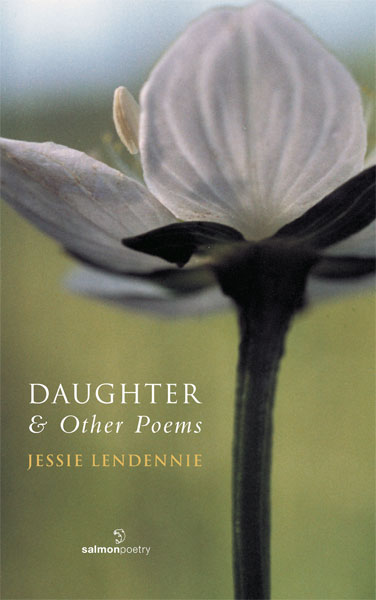 Daughter and Other Poems

"This is an ambitious poetic statement. It attempts to get at the initial shadows and regrets which are so formative, finally, on the imagination. Its use of language is eloquent and concentrated and its juxtapositions are often daring. Jessie Lendennie breaks her own ground with verve and determination."

"In Daughter Jessie Lendennie writes with a spare grace and unsparing wisdom of the kind of dreams and nightmares that can never be outgrown. She shines her clear and steady light on the dark house of childhood, pointing to what is primal and essential to the way each of us will experience life to the end of our days." 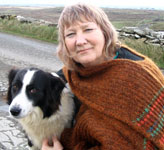 Jessie Lendennie was born in Arkansas, USA. After years of travel, she settled in Ireland in 1981. Her previous publications include a book-length prose poem Daughter (1988); reprinted as Daughter and Other Poems in 2001. She complied and edited: Salmon: A Journey in Poetry, 1981-2007;  Poetry: Reading it, Writing It, Publishing It (2009) and Dogs Singing: A Tribute Anthology (2010).  She is co-founder (1981) and Managing Director of Salmon Poetry. Her poems, essays and articles have been widely published and she has given numerous readings, lectures and writing courses in Ireland and abroad, including Yale University; Rutgers University; The Irish Embassy, Washington D.C; The University of Alaska, Fairbanks and Anchorage; MIT, Boston; The Loft, Minneapolis, MN; Café Teatre, Copenhagen, Denmark; the University of Arkansas, Fayetteville;  The Irish American Cultural Centre, Chicago and The Bowery Poetry Club, New York City. She is currently working on a memoir To Dance Beneath the Diamond Sky.
An excerpt from Jessie Lendennie's prose-poem Daughter

She lay still and thought the sounds she heard were the beginnings of comfort. Thought she could feel the sea on the wind; the fall, falling of the waves. Wind sails riding the horizon. The cold wash of the ocean against the walls of her small room.


Emma's mother straightened herself slowly, rubbing one hand along her lower back. She stood and adjusted the shoulder strap of the long canvas sack, half-full of cotton, and turned to look at Emma who ran toward her; then back to the row ahead. She squinted as the sun caught her eyes. Heat shimmered across the field. She lowered her head to tilt her wide-brimmed straw hat against the glare.


She lay still and the night moved past her. Branches brushed the window. She wondered, as a child, of fingers tapping at windows, of hands that reached out so softly to brush a cheek ... but never moved away.


Rows upon rows of cotton plants in the heat. Emma watched the pickers moving along the rows, filling their long trailing sacks. She rode the end of her mother's cotton-sack, making patterns with her fingers in the dust. She daydreamed lazily as the sack grew softer and her mother's pace slowed. She saw her sister running awkwardly behind them, heard her brothers arguing, and above her, her mother's mild voice.


In the darkness she imagined the silence at the centre of the wind. Hoped for the sound of rain; counted hours, years. Saw the morning path leading away between the cliffs.

Daughter by Jessie Lendennie is a moving and impressive livre compose. formally, an interlinked series of prose poems, Daughter follows the thoughts and moods of Emma who confronts the recent death of her mother. The concern is with personal identity, in particular with the highly charged material of the death of the mother: love, sorrow, guilt, emotional overload.

Daughter varies between two prevalent modes typographically separated. The first concerns a present, waking world of work and play. This world of starkly realistic details is the past which Emma enters through memory eliding into dream; for instance she dreams of visiting her mother in hospital:
Emma walked along the hospital corridor. She heard her grandmothers's voice. Her mother's thin, pale hand touched her own weakly from the high white bed.

The other mode, italicised, at first glance seems the more conventional dream-material. It is recognizably closer to lyric poetry with wishful sentimentality, vague yearning, elusive imagery:

And in her heart there was darkness... the gull cry of darkness, when the winter has come early across the steep cliffs.

Ironically, this mode represents the actual, the 'real', the 'now', Emma in her present bereavement. The poetry glides between the two; between a painful reality and a vague emotionalism; between a vital past and a shadowy present; until the reader see the two are inter-dependent. It is all time as eternally present, but harder than Eliot's vision in finding no consolation that time is redeemable. In Daughter the past is not revised to console the present: 'the pain was ageless.... timeless' (p. 1)

Daughter powerfully dramatises a loss which cannot be denied, as Emma holds fast in memory and dream to her mother, her emotional centre. In so doing Emma learns what as a child she was too self-absorbed to notice, the mother's hard, weary life in a male-centred world. The pain becomes memory and 'past', it isn't dulled, it is intensified. The last line encapsulates the anguish of this paradoxical continuing past: 'and the child said, "If you love me, take me with you."' The poet's achievement prepares the reader for this nakedly sentimental cliche. The seemingly throw-away and 'fortunate' chiasmus is revealed as inevitable and exact. It charts Emma's sense of self, the love which is a loss, a profundity which beggars words but is shadowed in the poet's design.


"This is an ambitious poetic statement. It attempts to get at the initial shadows and regrets which are so formative, finally, on the imagination. Its use of language is eloquent and concentrated and its juxtaposition are often daring. Jessie Lendennie breaks her own ground with verve and determination."

"In Daughter Jessie Lendennie writes with a spare grace and unsparing wisdom of the kind of dreams and nightmares that can never be outgrown. She shines her clear and steady light on the dark house of childhood, pointing to what is primal and essential to the way each of us will experience life to the end of our days"

"This is an ambitious undertaking, but nothing less would do justice to the haunting quality f the poem. Its theme, the death of her mother during Jessie's childhood, is developed partly through the child's consciousness, partly through an adult dream-state. The distance between the poet's home in Arkansas, and her preset home in Galway, where the poem was written, suggests the immense physical and psychological territory that the poem covers.

"Reading the poem, I remembered a Victorian illustration to a lost epic, of which only a fragment remains - 'Childe Rolande to the Dark Tower came' - where the protagonist faces the final, most dreadful stage of his journey. Well, Tolkien has made us familiar with the Dark Tower now; and its foundations lie where they always have lain, in lost childhood memories, sense-impressions, the darkness and fear of childhood that are fearsome to confront. And they must be confronted, as the poet has faced them in 'Daughter', for they are both the bedrock and watertable of our life."

".....this is the journey of Demeter and Kore: the lovely harvest scene on page 10, a find of family apotheosis; the child herself venturing alone in her red dress on page 44, Kore gathering flowers in the fields of Enna; the land made bare, lacking its fertilising power; and the slow descent in the underworld where mother and child will recover each other. The book closes on the great prayer of Demeter to her child: 'If you love me, take me with you'. In this poem, that the mother is the child, and the child is the mother, is what the original Mystery is about, after all."

Emma's mother was dying.
'Cancer', her aunt's whispered, 'Cancer.'
Emma did not know the word. Could not stay in the house with the whispering. She bit her lip, stood in the doorway looking out

With such stark language, Ms. Lendennie conveys quickly and broodingly the childhood experiences of Emma, and her relationship with her family, primarily her mother. The book is designed so as to tell the story, in brief vignettes, on the left-hand page, with the private world of her thoughts and dreams on the right, italicized. While not an original technique (one thinks of John Berger's 'G') it nonetheless sets up an interesting counterpoint, and real poetry is achieved:

In the darkness She imagined the silence at the centre of the wind
Hoped for the sound of rain; counted hours, years

How could she know there would be no forgetting? That she would always remember... that this was her life, and when they said, "She's grown out of it" they were wrong, wrong.

Two Irishmen have also written poignantly and memorably of the death of mothers - John McGahern in 'The Leavetaking' and Aidan Higgins in 'Balcony of Europe'. Ms. Lendennie manages the same emotional wringing, with a spare, deft prose:

Emma's mother turned in her sleep, trying to rest the pain Emma did not understand.. only knew she was the baby, her mother's baby.

And that is three lines at the top of an otherwise blank page - the pregnant silences of Berman's 'Cries and Whispers', also dealing with death, are recalled.
Emma began to hate the sun, the yellow grass, the shadeless trees; hated the smiling girls in their lovely patterned dresses.

An absorbing exercise in prose poetry....

Daughter is Jessie Lendennie's first book. It is in the main an evocation, and maybe catharsis, of a childhood trauma, the death of a mother - hastened perhaps by a drunken father. This is a bare biographical outline and the book is the story which fills it out.

What makes it so interesting is its form. The narrative is in prosaic bursts, but juxtaposed on opposite pages and in italics are flashes of poetic intensity which deepen its meaning. This is the point where 'Emma' has learned that her mother is dying, and the classic situation of the poor girl amidst affluent neighbours gives it added poignancy

Emma began to hate the sun, the yellow grass, the shadeless trees; hated the smiling girls in their lovely patterned dresses.

Juxtaposed with this is:

And the time was the slowest of movements, and so late, so late
Fine rain against thin glass, against hard stones...

Daughter is a courageous, original and memorable debut.


Review by Edward Power, The Nationalist:

".... The writing is startlingly beautiful:

In the dark she traced a circle around the willow tree,
knew the tree could not go beyond, for all its weeping

The image of the willow tree, among others, recurs throughout the narrative, adding to the haunting, almost gothic, quality. Ezra Pound described an 'image' as that which presents an intellectual or emotional complex within an instant of time. I'd be inclined to extend this to apply to Jessie Lendennie's book, and say that Daughter presents an intellectual and emotional complex within beautifully crafted instants of life and time. Her poetic style acts as a prism, so that the 'clear and steady light' Lendennie shines on the 'dark house of her childhood' is refracted and re-housed in the being of the reader. It is a light that sometimes hurts the inner eye to unsheddable tears, and I must confess, while reading this book, to being moved to shedding one or two..."

Other Titles from Jessie Lendennie 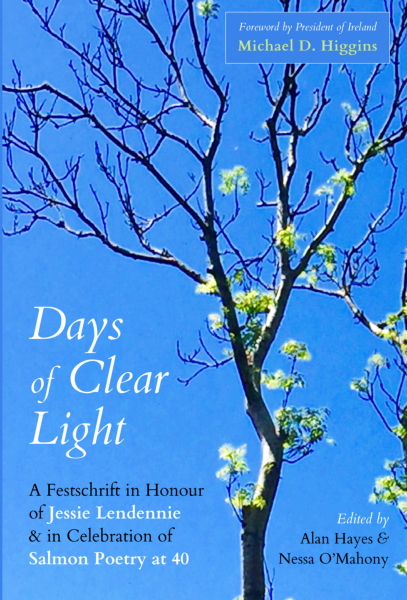 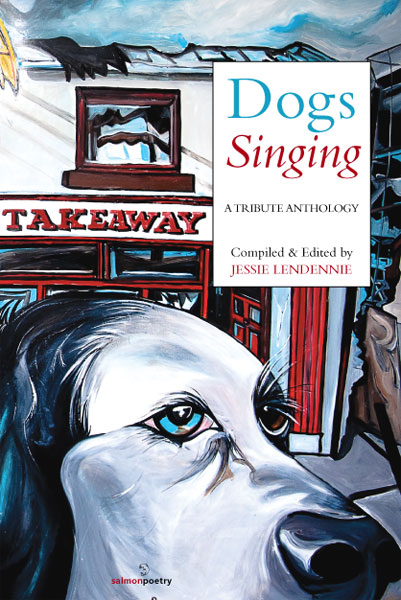 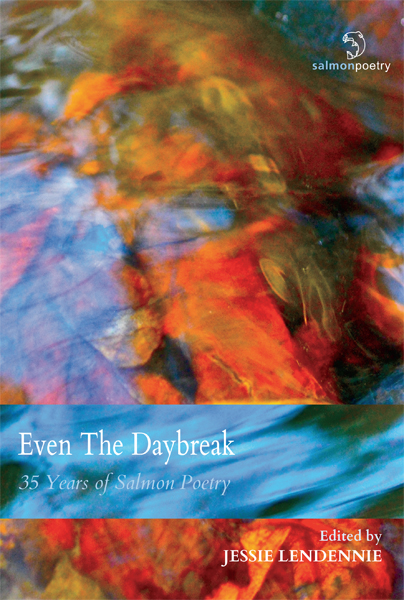 Even The Daybreak - 35 Years of Salmon Poetry 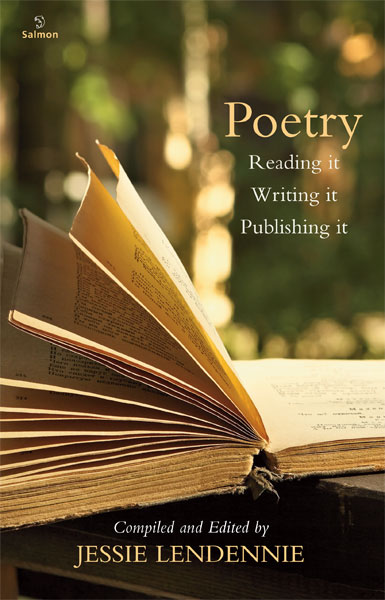 Poetry: Reading it, Writing it, Publishing it 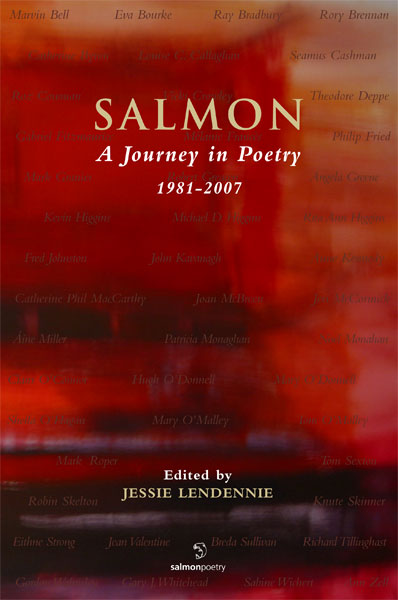 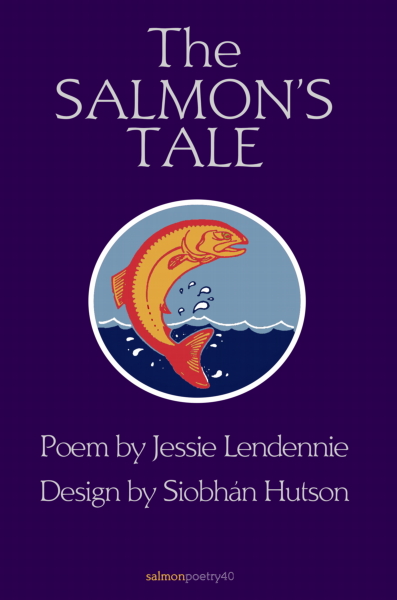 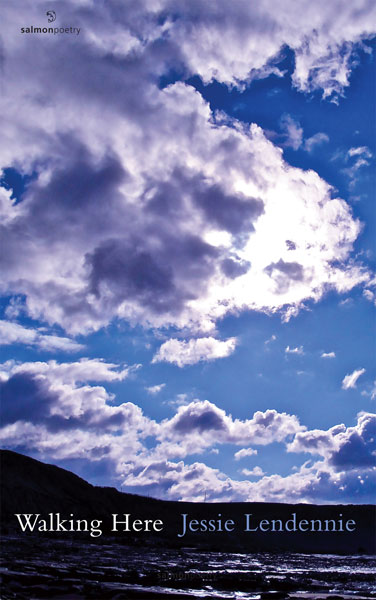